Why Paul’s Argument Against ‘Erga Nomou’ was not Against Doing ‘Works of the Law,’ But Instead Based on Faithfulness to What Torah Taught About Circumcision

New Essay Published:
Re-Framing Paul’s Opposition to Erga Nomou as “Rites of a Custom” for Proselyte Conversion Completed by the Synecdoche “Circumcision”

In Galatians, Paul challenges some Christ-followers who are not circumcised but interested in undertaking this “rite” (ἔργον) from the premise they have failed to recognize that, according to Torah, they cannot do so because the commandment of circumcision applies to Jews and to non-Jew slaves acquired by Jews, and they are neither. Non-Jews who have already heard (faithfully obeyed) the gospel, such as themselves, cannot undertake to become proselyte Jews, even if others may seek to influence them that they should or must do so to justify the gospel-based claim to have become sons of Abraham.

This essay challenges the received views of Paul’s phrase ἔργα νόμου (usually “works of the law”), which is understood to indicate Paul’s opposition to Torah, or certain elements thereof. Instead, I propose that Paul’s phrase denotes “rites of a custom,” specifically the customary rites involved in proselyte religio-ethnic initiation, which are completed by the signifying rite (synecdoche) of “circumcision.”

What Paul opposed was circumcision and the related initiation rites, not Torah, which he puts into tension with πίστις (faith[fulness]), in their case. Paul argues from Torah that the custom at issue, that these non-Jews undertake proselyte transformation and thus adult male circumcision, is not enjoined in Torah.

The implications for reading Paul and extrapolating biblically based warrants for or against circumcision are many, with more than a few challenges to the prevailing Pauline discourses about this topic. Finally, in keeping with the interests of the conference on the topic of circumcision more broadly, I offer a hermeneutical reflection on circumcision for later “Christian” males apart from that qualification.

This issue (8: 2021) of the journal JJMJS contains other essays on the topic of circumcision that I expect you will find useful. Most of these began as papers at a conference on the topic of “circumcision” held in May, 2019, in Oslo, Norway, entitled “Ancient Attitudes in Light of Contemporary Questions,” organized by Karin Neutal, who also edited this special issue. The essay by Thomas R. Blanton IV examines some elements in my earlier work on erga nomou and circumcision on which the essay in this issue builds, published in “The Question of Conceptualization: Qualifying Paul’s Position on Circumcision in Dialogue with Josephus’s Advisors to King Izates,” pages 105-52 in Paul Within Judaism: Restoring the First-Century Context to the Apostle, ed. Mark D. Nanos and Magnus Zetterholm (Minneapolis: Fortress Press, 2015). 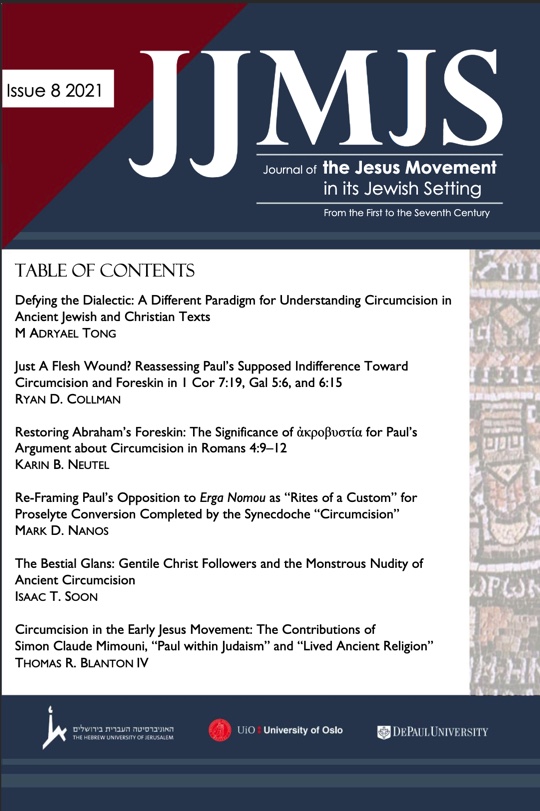